Are you a believer of The Law of Attraction? 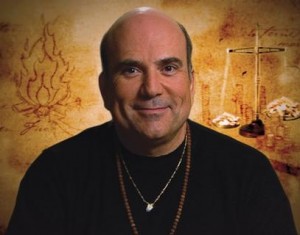 Dr. Joe Vitale – whom you may have seen in the hit movie The Secret or on Larry King live has just outdone himself.

You see, it’s no secret that Dr. Joe Vitale is probably the world’s foremost expert when it comes to the Law of Attraction.

After all, he completely transformed his life and went from being homeless to living the life of his dreams by understanding how the Law of Attraction works and using it to his advantage.

You will master all of these topics through the Law of Attraction Certification Course:-

– Unlocking the Mysteries of the Law of Attraction

– That Which Animates the Universe

– A Different Kind of Magnetic Force

– The Frequency of Attraction

– An Error That People Love to Repeat

– Reflections in the Mirror

– Taking Control One Thought At a Time

– Persistence Pays Off In Many Ways

– Are You On The Right Track in Life?

– Aligning Yourself With the Universe

– Approaching the Universe for Your Needs

– Establishing a Solid Connection with Desires

– A Simple Way of Purging Negativity

– The Role of Forgiveness in Manifesting

– The Power of Emotions

– The Power of Intention 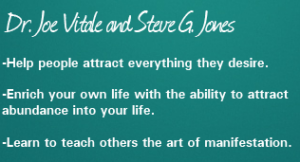 This is bar none the most comprehensive, yet easy to understand Law of Attraction Certification program that I have seen.

And if you’re interested in not only mastering the mechanics of Law of Attraction but also positioning yourself to get paid for your expertise, then this is something you simply don’t want to miss.

As part of the course, you will receive 5 study manuals (each approximately 20 pages in length) by Dr. Joe Vitale and Steve G. Jones

Each graduate will receive lifetime support from the Global Sciences Foundation.

Upon completion of your training, you will be certified by the Global Sciences Foundation. See an example certificate below: 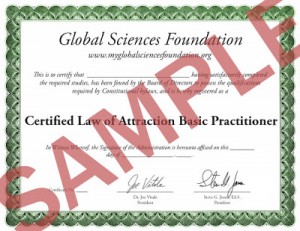 Dr. Joe Vitale has not only personally used the power of the Law of Attraction to go from being homeless to having everything he’s ever desired, he was also chosen to appear in feature films such as “The Secret” and national television shows such as The Big Idea with Donny Deutsch and Larry King Live. Additionally Dr. Vitale has authored several best selling books on this topic and remains one of the world’s foremost experts on the Law of Attraction.

I spent a Memorial Day outside of Austin, TX, at a backyard BBQ party with Joe Vitale and several other Internet  marketers  after a seminar in San Antonio. It was neat. I did some Laser Reiki energy healing for these presenters.  by Taylore 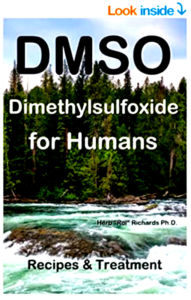 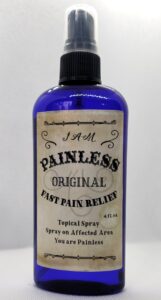